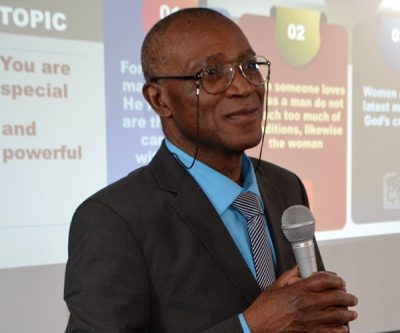 He is a medical practitioner, an Obstetrician and Gynecologist based in Kyiv, Ukraine. He is also a pastor called by our Lord Jesus Christ to shepherd the flock. Born in Ughelli in defunct mid-western region of Nigeria (now Delta State), he had his formative years in Lagos. He obtained MD from Bogomolets National Medical University, Kyiv, Ukraine. He returned to Nigeria for his medical internship at the University of Port Harcourt Teaching Hospital, Port Harcourt, Rivers State, Nigeria and later became Senior House Officer & General Practitioner at UNIPORT Teaching Hospital. He worked as Chief Medical Doctor, Pedata Medical Clinic, Port Harcourt, Rivers State, Nigeria. He returned to Ukraine in 1987 where he obtained his PhD and in the 1990s was called to answer the pastoral call of the Lord on his life. Dr Osoroh is a full time Resident Pastor of the English Branch of the Embassy of the Blessed Kingdom of God for All Nations, Kyiv, Ukraine.His scholarly works have appeared in the American Journal of Reproductive Immunology; Journal of Pediatrics, Obstetrics and Gynecology; and International Congress of Reproductive Immunology among others. He is fluent in five world languages. He is a member, Board of Trustees, Emmanuel Online Christian College (EOCC), USA. He can be reached at: +38 (063) 0411411 or email: ovieosoroh@tocu.education